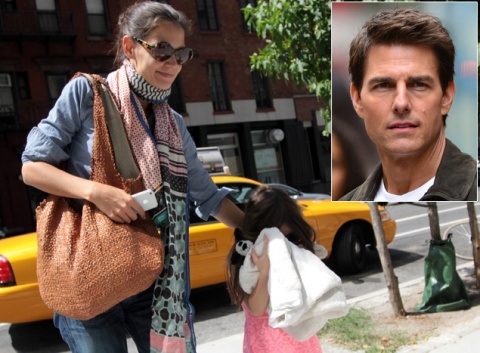 Holmes, 33, is getting primary physical custody, while Cruise, the most high-profile member of the controversial Church of Scientology, will receive significant custodial time, media reports say. Photo by New York Daily News

"The case has been settled and the agreement has been signed," Holmes' lawyer, Jonathan Wolfe, said in a statement to People magazine.

"We are thrilled for Katie and her family," he added.

A spokeswoman for Cruise confirmed the settlement in an email to Reuters: "It is done."

"We are committed to working together as parents to accomplish what is in our daughter Suri's best interests," the statement read.

"We want to keep matters affecting our family private and express our respect for each other's commitment to our respective beliefs and support each other's roles as parents."

The divorce has raised speculation that the couple broke up after arguing on whether or not daughter Suri should be raised as a Scientologist. It seems that it was Suri, rather than cash, that was uppermost in the negotiations.

According to unconfirmed reports Holmes, 33, is getting primary physical custody, while Cruise, the most high-profile member of the controversial Church of Scientology, will receive significant custodial time.

It was Holmes' first marriage and Cruise's third. He previously was married to actresses Mimi Rogers and Nicole Kidman, which both ended in divorce. He adopted two children with Kidman.

Cruise also had a three-year relationship with the Spanish actress Penelope Cruz.