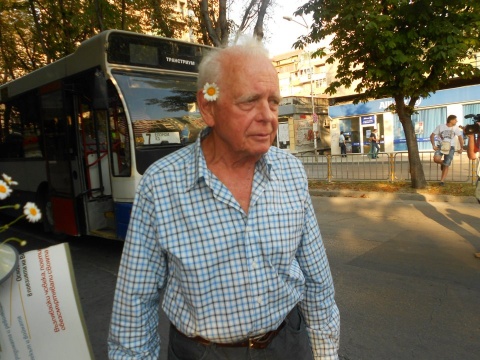 Former Foreign Minister and career diplomat Ivan Stanchov, also popular in Varna by his charitable activities for disabled children at the protest rally against construction in the city's Sea Garden. Photo by Facebook

Scores of citizens and environmentalists rallied again Thursday evening in Bulgaria's Black Sea capital Varna with demands to ban all construction in one of the city's top landmarks, the beautiful Sea Garden.

On Wednesday, under strong public pressure, at a dramatic session, the Varna municipal council banned construction in the park, but the demonstrators vowed to continue their fight and rally until the thorny issue with the so-called Alley One is resolved.

They demand the annulment the Alley One deal with Mayor Kiril Yordanov providing all available documentation on it, and free access for Varna residents and visitors to the entire coastal alley. The participants further want a full audit of all construction done so far in the Sea Garden, and strict sanctions for violators, who have already breached the law,

The demonstrators, organized in a flashmob, blocked once again the main "Osmi Primorski Polk" boulevard at the intersection with "Bratya Miladinovi" street and then marched to the key "Sevastopol" intersection, blocking traffic there as well. The march ended at Alley One, under the applause of patrons, sitting in nearby restaurants and coffee shops.

This time, there were no arrests and clashes with police.