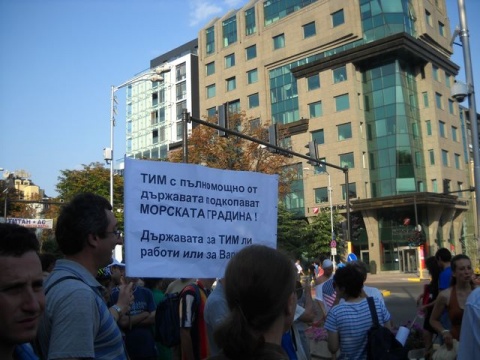 Demonstrators in Varna are holding signs reading "TIM Have Authorization by the State to Destroy the Sea Garden," and "Is the State Working for TIM or for Varna." Photo by Darik Varna.

Protest rallies of citizens and environmentalists are shacking Bulgaria's Black Sea capital Varna with demands to ban all construction in one of the city's top landmarks, the beautiful Sea Garden.

Just one day ago, under strong public pressure, at a dramatic session, the Varna municipal council banned construction in the park, but the demonstrators vowed to continue their fight and rally until the thorny issue with the so-called Alley One is resolved.