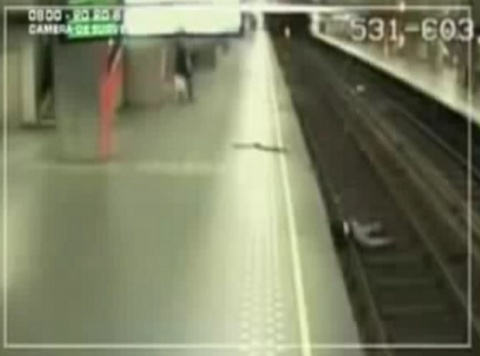 A grab from CCTV footage shows the body of Lyuben Tyulekov on the tracks in the Brussels Metro after he was beaten severely by a youth gang.

A Belgian court for juvenile offenders has acquitted the only suspect for the savage beating of a Bulgarian student in the Brussels metro.

The shocking crime against the 22-year-old Bulgarian student, Lyuben Tyulekov, was committed on New Year's, 2010, in the "Porte de Namur" metro station in Brussels. The victim, who was in Belgium's capital for an internship, was attacked inside the metro station by a group of young people.

After severely beating the Bulgarian, the perpetrators threw him over the railing to the train tracks and left. The young man survived due to alert passengers, who were able to pull him out moments before a train arrived at the station.

The Bulgarian student will suffer from his severe injuries for the rest of his life. He is now partially deaf and partially blind as a result of the assault.

A 17-year-old Belgian citizen who bears partial resemblance to one of the attackers as caught on CCTV footage, has now been acquitted of a murder attempt, RTBF reported, as cited by Focus.

Numerous cameras have recorded the savage attack but the CCTV footage cannot be used because of its poor quality.