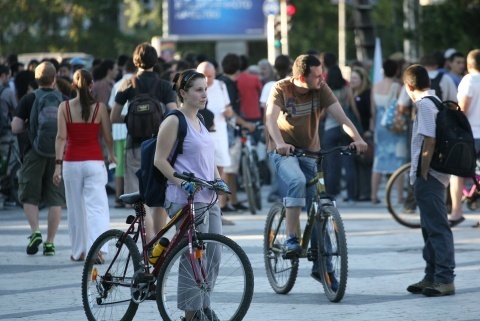 Sofia recently became the center of mass rallies of opponents to a set of amendments to the Forestry Act facilitating construction works. Photo by BGNES

The notorious Bulgarian company Vitosha Ski accused environmentalists of attempting a hidden privatization of the national park Vitosha by protesting the Forestry Act.

The warning was issued Monday after a meeting between the above parties and the Parliamentary Agriculture and Forestry Committee to discuss the controversial amendments to the law, recently passed by the Parliament.

Vitosha Ski label demands of eco activists to mandate that investors pay for changing the statute of the land in order to obtain construction rights absurd, and remind they own the ski lifts on the territory of the natural park Vitosha in the mountain with the same name near the capital Sofia. The ski equipment has been purchased by the company through municipal and State privatization, thus they are owned by it and the law gives them construction rights anyway, the statement claims.

"We firmly oppose attempts of environmentalists NGOs to introduce amendments to the Act that would give opportunities for hidden privatization of illegal facilities in the Vitosha natural park, which have already been established by the authorities. This is a brutal takeover attempt that does not help the modernization of the ski equipment. We wish to replace all the obsolete equipment with a modern one while obeying the law, not violating it," the statement reads.

According to Vitosha Ski, the environmentalists want to create a law that would ultimately push investors away, thus consensus cannot be reached.

In conclusion, the company declares they are fully aware that they and the public opinion will remain subject of manipulations and simulations for a long time while "it has become obvious that other interests are being served."

Thousands of Bulgarian eco activists and other citizens opposing the Forestry Act staged protest rallies in the area of the key intersection of Orlov Most (Eagles Bridge) in Sofia for a week after the Parliament passed the amendments on June 13.

In the aftermath, Bulgarian President, Rosen Plevneliev issued a veto on all of its texts.

Counter protests of people backing the amendments were also held and are widely-believed to be staged by The "Nature for People and Regions" coalition funded by notorious businessman Tseko Minev.

Vitosha Ski is held by Minev, who also holds First Investment Bank, as well as the Yulen ski company that operates virtually the whole Bansko resort. He is seen as the person behind the controversial amendment and the one who stopped ski lifts in Vitosha for the entire winter on grounds he was obeying the old texts of the Forestry Act.

In addition, Minev is the president of the Bulgarian Ski Federation, which has been receiving heavy support by the government, and has been concluding contracts with companies dependent on the businessman himself, according to a check by Bulgaria's Agency for State Financial Inspection.

Opponents of the new Forestry Act insist it is framed in such a way that firms in the situation of Vitosha Ski would not have to face the same administrative hurdles as before and would be able to deforest and construct at will, following a short application process.

On June 27, the Members of the Bulgarian Parliament passed the veto of the President Rosen, which means that the entire text of the controversial legislation is returned to be reexamined and debated again from scratch.

A little bit before the MPs were to vote on the veto, Prime Minister, Boyko Borisov, send Agriculture Minister, Miroslav Naydenov, on an emergency trip to the Parliament to convey the message that the Forestry Act would not be debated until 100% consensus is reached on the disputed clauses.