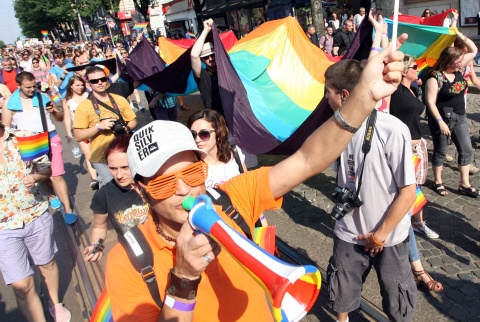 Members of the LGBT community and supportive heterosexual Bulgarian citizens marched Saturday on the Sofia Gay Pride 2012. Photo by BGNES

Over 2,000 people gathered for the 5th annual Sofia Gay Pride, which is taking place in the Bulgarian capital Saturday.

LGBT people, as well as heterosexual citizens, joined the event to express their desire for equal rights to all, and to protest against continuing discrimination against people of differing sexual orientations in Bulgaria.

The rally, which includes a march through central Sofia, and a concert later Saturady evening, is going on without any conflicts or violence.

In previous editions of the Sofia Gay Pride, far-right extremists have attempted to attack the rally, provoking minor clashes with the police.

Chance passers-by smiled and waved hands at the marching people, who were carrying the traditional rainbow flag, reports the Focus Information Agency.

A number of other foreign embassies, as well as 134 MEPs have sent official letters of support for the Gay Pride.

"We're here to show that we are proud of who we are and that we are not afraid," was the message of many ralliers, according to BGNES.

In a sorry event Saturday morning, some 200 citizens, assembled by 5 far-right nationalist parties, marched in a counter-rally in Sofia, raising a number of homophobic slogans.

The 5th annual Sofia Gay Pride continues with a concert in the park of the Soviet Army monument, featuring Maria Ilieva, Sofi Marinova, Voice of Boys, and other Bulgarian performers.