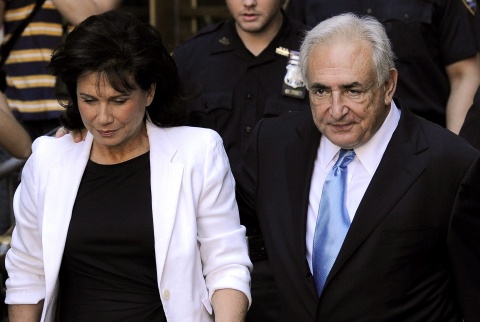 A file photograph shows Dominique Strauss-Kahn (R), the former director of the IMF, and his wife, Anne Sinclair, leaving the Manhattan criminal court after Strauss-Kahn was granted a lesser bail and an end to his house arrest in NYC,1 July 2011 EPA/BGNES

Former IMF chief Dominique Strauss-Kahn and his wife Anne Sinclair said Friday, June 29, they would sue French celebrity magazine Closer for invading their privacy with a story claiming they had separated.

"Having taken note of the cover and content of celebrity magazine Closer, Dominique Strauss-Kahn and Anne Sinclair have decided to sue this publication for invasion of privacy," their lawyers said in a brief statement, cited by BGNES.

They neither confirmed nor denied the report. Sinclair, a 63-year-old journalist, has stood by Strauss-Kahn throughout a series of sex scandals that saw him resign from the International Monetary Fund and dashed his hopes of making a bid for the French presidency.

The charges were eventually dropped but Strauss-Kahn, 63, has since faced a series of criminal and civil actions in connection with alleged sex crimes.

The hotel maid, Nafissatou Diallo, has launched a civil suit against Strauss-Kahn in New York seeking unspecified damages, while he has in turn filed a countersuit for malicious prosecution and defamation.

French prosecutors have also opened a preliminary investigation into accusations he took part in a gang rape in the United States. Strauss-Kahn denies committing criminal acts in both cases.