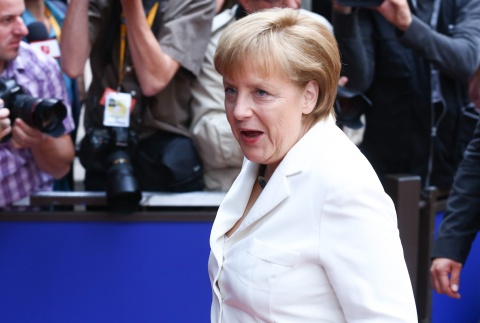 After thirteen hours of talks EU leaders have agreed to use the eurozone's planned bailout fund to directly support struggling banks, without adding to government debt.

Under the deal, European leaders agreed to create a single supervisory body to oversee the eurozone's banks which could use the single currency area's rescue funds, the European Financial Stability Facility or European Stability Mechanism, to aid banks directly without adding to governments' debt.

"We agreed on something new, which is a breakthrough, that the banks can be recapitalized directly in certain circumstances," he said.

"The most important condition is that we have to put in place a single supervisory mechanism and second decision is that we are opening the possibilities to countries who are well behaving ... to make use of financial stability instruments ESFS, ESM in order to reassure markets."

European Union leaders are hoping for implementation of the agreement by July 9, an EU statement said.

The deal, widely considered as a concession by German Chancellor Angela Merkel, is a big step toward a closer banking union across the 17-nation eurozone, which could be seen as a precursor to fiscal union.

"It is imperative to break the vicious cycle between banks and sovereigns," the eurozone leaders said in a statement.

Their proposals should be considered "as a matter of urgency" before the end of the year, the statement said.

The single supervisory mechanism would be in "compliance with state aid rules, which should be institution specific, sector-specific or economy-wide and would be formalized in a Memorandum of Understanding."