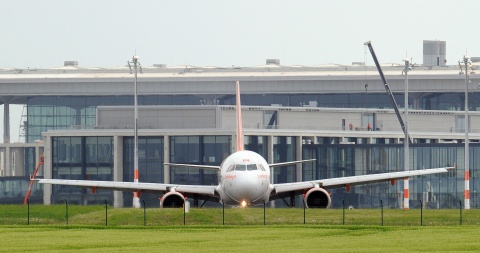 An airplane taxis past the buildings of the new Berlin-Brandenburg Airport in Schoenefeld, Germany, 09 May 2012. Photo by BGNES

A 19-year-old Serbian national has been prevented from boarding a Bulgarian airplane by the security officers at Berlin's Schoenefeld airportbecause she repeatedly announced she was carrying a bomb in her bag.

On Tuesday night, she was not allowed to board a Bulgaria Air flight to the Black Sea city of Burgas, according to reports of DPA cited by German media outlets.

Berlin police officers said that the young woman had repeatedly stated that she was carrying a bomb.

After checking her carry-on luggage, the security officers demanded that the Serbian citizen be penalized for breach of public order.

Bulgaria's national flag carrier Bulgaria Air, which was carrying out the charter flight to Burgas, is also entitled to demand a penalty for the offender.