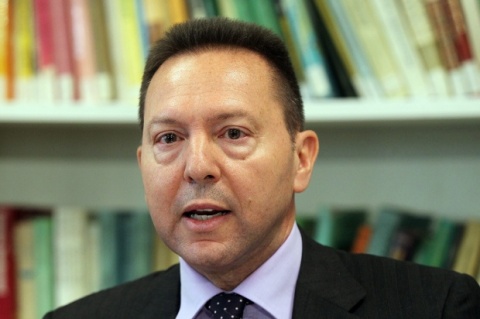 A photo dated 02 April 2012 and made available on 26 June 2012 shows Yiannis Stournaras speaking during a press conference, in Athens, Greece. EPA/BGNES

The appointment came a day after the man originally designated to assume the post, Vassilis Rapanos, chairman of the National Bank of Greece, resigned before he could be sworn in, citing health problems.

Rapanos, who reportedly has a history of serious health ailments and was admitted to a hospital with nausea and intense stomach pains on Friday, was released on Tuesday.

Stournaras, 56, is the founder of the Foundation for Economic and Industrial Research, and has advised previous Socialist governments, including that of Prime Minister Costas Simitis, which secured Greece's entry into the euro.

Formerly an adviser to both the Finance Ministry and the country's central bank, Stournaras was a research fellow and lecturer at Oxford University in the 1980s and remains an economics professor at Athens University.

Speaking at a seminar earlier in the day,. Stournaras said he was optimistic despite Greece's fiscal crisis.

"I think there are possibilities for Greece to emerge from the crisis," he said, as cited by international media.

"Greece has enormous potential, but we must pass through a wall of established ways of thinking if Greece is to change."

The new finance minister, who must be sworn in, will not travel to a coming European Union leaders' summit meeting, where his predecessor, George Zannias, the caretaker finance minister, will represent Greece as part of a delegation led by President Karolos Papoulias, a spokesman for the prime minister said. The president is standing in for Samaras, who has been advised against traveling following an operation for a detached retina.

The premier's office said Samaras would meet his coalition partners, Evangelos Venizelos, leader of the socialist Pasok party, and Fotis Kouvelis, chief of the Democratic Left - Tuesday evening to discuss strategy ahead of the summit meeting, where officials are expected to consider Greece's request for the easing of some of the terms of a debt deal with foreign creditors. State television reported that Stournaras was expected to attend the meeting.