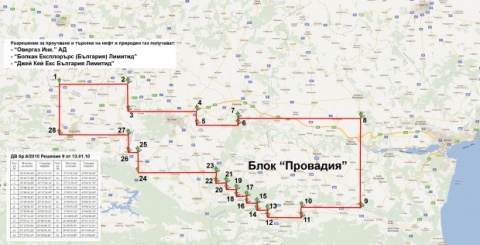 Gazprom-controlled Bulgarian gas company Overgas is commencing the second stage of conventional oil and gas exploration in the Provadia block onshore in eastern Bulgaria in the beginning of July, according to the firm's press office.

Some of the activities involving specialized equipment will take place on the territory of settlements in the region of Targovishte, Shumen, Kaspichan, Veliki Preslav and Provadiya, according to Overgas' press release.

The work schedule is now being coordinated with landowners and tenants.

All mayoral administrations in the area have been notified about the launch of the exploration works.

The owners of agricultural land on the exploration site will receive compensations according to an established scheme providing for a bank transfer of the value of their output according to market prices once a statement of findings is in place.

Overgas assures that the oil and gas exploration activities it will carry out on the Provadia block have nothing to do with shale gas drilling.

The company emphasizes that the methods it uses have been deployed in Bulgaria since the middle of the 20th century.

Overgas notes that the measurements are only taken on the surface using hi-tech equipment and pose no risks to the environment and the local population.