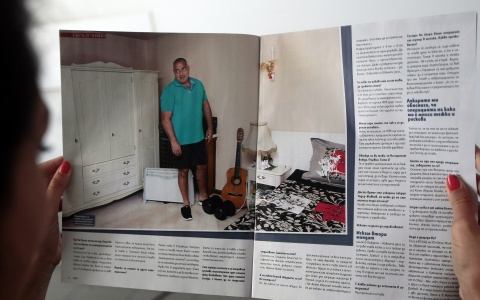 Manly Bulgarian PM Boyko Borisov at his home, guitar and dumbells by his bedside. Photo by Love Style/ BGNES

In a cover story meeting high journalistic standards of objectivity and integrity, Borisov shows his love and commitment to the arts, as well as his fascination with homey women.

"When I cannot fall asleep, I strum around on my guitar. I learn new songs," says the Bulgarian PM.

"Sometimes I also paint. I have an easel and watercolors upstairs on the terrace, in front of the room. Just today I was going to paint," confesses he.

The obliging Love Style journalist adds that, according to her, Borisov makes "absolute copies" of classical paintings.

Borisov's exceptional talents in painting surfaced in Bulgarian public life during a recent controversy when he was awarded a honorary membership of the Union of Bulgarian Artists.

While some painters strongly objected to the move, Borisov's Minister of Culture Vezhdi Rashidov, a sculptor, was quick to point out that the Bulgarian PM makes "brilliant" sketches during cabinet sittings.

In the Love Style material, the burly Borisov also shows a strong tenderness towards the fair sex, albeit with a somewhat sexist twist to it.

"I can live only with a woman that stays in the kitchen and does not go out," resolutely states the Bulgarian PM, adding that it was he who initiated the breakup with Tsvetelina Borislavova, an influential Bulgarian banker, owner of EIBank.

The Bulgarian PM, who is divorced, also confesses he currently has a new girlfriend, but does not want to name her, in order to protect her from inordinate public attention.

On the other hand, he says that, as things stand now, his duties as a statesman prevent him from having a full-blooded relationship.

"I cannot be in love. To be in love means thinking about someone, giving her your time, taking her to trips... Right now I cannot have such a relationship," laments Borisov.

Nevertheless, he is resolute that once he is done with politics, he is going to marry his present girlfriend and "take her in."

The prospects of the mysterious lady however does not seem to be that good in the short term, as Borisov also reaffirmed his resolution to serve another term as Bulgaria's PM after general elections in the summer of 2013.

"I want a second term, because I'm doing a good job - I'm opening new infrastructure projects and launching finished ones every other day," said a happily satisfied Borisov.