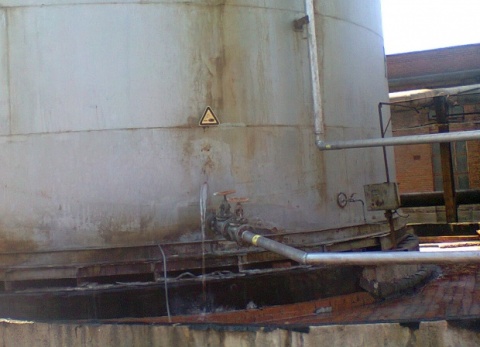 Workers from Bulgaria's troubled non-ferrous plant say that if left unattended the huge trunks with sulfuric acid can leak and poison the waters of the nearby dam, spreading the damage even to neighboring Greece and Turkey. Photo by BGNES

Workers from Bulgaria's troubled largest producer of non-ferrous metals, the Lead and Zinc Complex (LZC; OTZK) in the southern city of Kardzhali have decided to not quit but rather seek their overdue salaries through the Court.

Over 400 employees are approaching Monday the accounting department of the plant to ask documents about what is owed to them, and will then file claims with the Regional Court with the hope they can legally pressure the owner to pay the wages.

The Court is expected to issue orders for forceful fulfillment of monetary obligations.

Representatives of the Confederation of Independent Syndicates in Bulgaria, KNSB, at the complex say that workers have decided to postpone their mass quitting until July after being informed that First Investment Bank, FIB, has been able to find a private investor for the troubled producer of non-ferrous metals.

KNSB, however, voiced alarm over escalation of tensions with workers threatening hunger strikes or jumping from the OTZK chimneys.

Despite warnings they would not come to work, metallurgists, who must maintain the non-stop production of the furnaces, still continue to report to their 5-shift jobs.

The departure of employees who maintain the furnaces can create huge problems, metallurgy experts explain. The zinc must be kept in liquid state otherwise the furnaces will become unusable. This would not present an environmental hazard for the city, but will force the complex either to close for good or to replace the furnaces in question.

The technologist of the plant, Stefan Atanasov, on his part, alarms that if huge tanks filled with sulfuric acid are to be left unmonitored, possible leaks can cause an environmental disaster, adding this is what is stopping people from quitting.

The leaks can poison the waters of the nearby dam, spreading the damage even to neighboring Greece and Turkey, the workers warn.

The problems in Kardzhali have been festering since March 2012. The workers at the plant, owned by Valentin Zahariev, have not received their salaries for 6 months now, which provoked a number of mass protest rallies.

After the government interfered, they were paid a 1.5 monthly salary right before Easter. At the time, Prime Minister, Boyko Borisov, personally promised them a new owner, to be found in 2 months. The only interested investor remaining now is Silesia, Economy and Energy Minister, Delyan Dobrev admitted.

However, according to the regional coordinator of the Zashtita (Protection) labor union, Stefan Atanasov, the new investor is not the Polish Holding. He informed that FIB was ready to finance this "mysterious" company, whose representatives are to arrive in Kardzhali in 2 weeks.