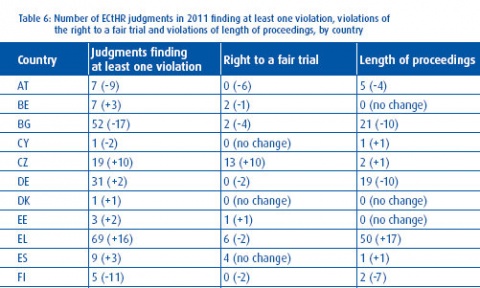 Bulgaria is ranked after Greece, Romania, and Poland on fundamental rights in the EU in 2011 by EUFRA. Table from the 2011 FRA Report

Bulgaria is one of the EU member states with the most fundamental human rights violations in 2011, reported the European Union Agency for Fundamental Rights (FRA).

In 2011, the European Court of Human Rights (ECtHR) issued 52 judgments finding at least one human rights violation, violations of the right to a fair trial, or violations of length of proceedings in Bulgaria, states the FRA annual report on fundamental rights launched on the 20th of June.

Bulgaria's number of 52 human rights violations ranks the country fourth in the EU, behind Greece with 69, Romania with 58, and Poland with 54.

Sweden is the only country without a single EctHR judgement finding fundamental rights violations, reported BGNES.

Positive developments have been made in 2011 but the EU and its Member States still face various challenges, pointed out the FRA officials, shortly before launching the Annual Report 2011 in the European Parliament at the Committee on Civil Liberties, Justice and Home Affairs (LIBE) in Brussels.

One of the main challenges for the EU is establishing a common European asylum system by the end of 2012, the FRA report suggests.

Some of the other areas which present challenges for the Union are border control and visa policy, information society and data protection, and equality and non-discrimination, states the report.