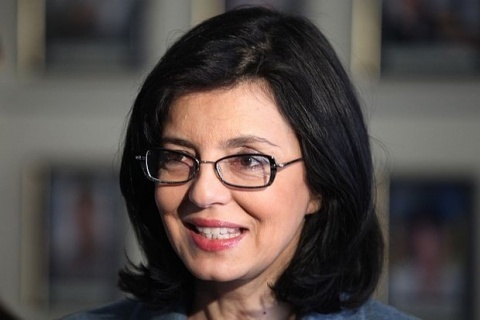 Former EU Commissioner and founder of the Bulgaria for Citizens movement Meglena Kuneva declared her formation will run solo at the 2013 parliamentary elections without any coalitions.

Kuneva spoke Wednesday in an interview for the Bulgarian National Television, BNT.

Commenting on accusations from the right-wing Union of Democratic Forces (UDF) that her movement used as advertisement video from the first mass rallies after the fall of Communism, which are known as UDF rallies, the former EU Commissioner stated that she is interested only in people and not in what others are saying about her.

"There is nothing that I have done to apologize to UDF," said she.

According to Kuneva, the main task before Bulgaria is to discontinue the vicious practice of denying the obvious. She noted as another problem the replacement of debates and connections between the political parties and the people with discussion about relations between these parties.

Meglena Kuneva announced officially the transformation of her civic movement to a political party on Europe Day, May 9.

In March, the ex Commissionet discontinued her membership in the liberal National Movement for Stability and Prosperity, NMSP, party.

Recent polls show that in addition to the ruling center-right Citizens for European Development of Bulgaria party, GERB, the left-wing Bulgarian Socialist Party, BSP, and the ethnic Turkish Movement for Rights and Freedoms, DPS, the formation of the former EU Commissioner is the only one with real chances to win parliamentary seats at the 2013 general elections.