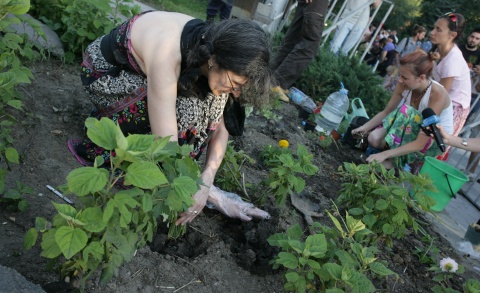 Young Bulgarian citizens have assembled for the fifth consecutive evening at Eagles Bridge intersection in the center of capital Sofia to express their outrage at Bulgaria's new Forestry Act and the state of the country's democracy.

The ralliers are planting flowers in the area, which is also the entrance to one of Sofia's main parks, the Borisova Gradina.

They are also debating their further actions and painting signs for future rallies in the coming days, as a presidential veto on the act will be under consideration in Parliament.

The law, adopted by Parliament Wednesday, provoked rallies of thousands that for three evenings in a row clashed with riot police to block traffic at Eagles Bridge (Orlov Most).

Protesters, organized by means of social network Facebook, say that the new legislation opens the gate to a vicious liberalization of construction in protected areas.

The legislative amendments were first pushed through Parliament in early January at the request of companies associated with businessman Tseko Minev, who holds a large share of Bulgaria's ski business.

Although Bulgaria's President Rosen Plevneliev vetoed the law Saturday, members of the ruling GERB cabinet have made it clear they intend to push through the Forestry Act when Parliament reconsiders it in the coming 2 weeks.

If Parliament re-adopts the act, the President will not have the powers to impose a second veto, as per the Bulgarian Constitution.

Sunday GERB politicians, aided by an organization known to be funded by Tseko Minev, staged a fake counter-protest, which blocked the international E-79 road to Greece, without interference by the police.

What emerged as an environmentally-motivated protest is now shifting to an Occupy-style movement that cries out against what participants see as heavy deficiencies in the functioning of democracy in Bulgaria.