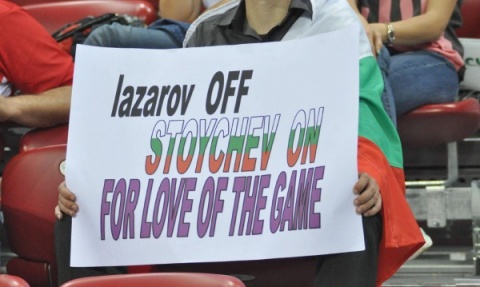 Volleyball fans protested in Sofia against the ousting of the popular and successful coach of Bulgaria's national men's volleyball team. File photo

Volleyball fans gathered Saturday in the Bulgarian capital Sofia to protest against the quitting of the coach of the country's national men's volleyball team, Radostin Stoychev.

The rally was held in front of the building of the Ministry of Physical Education and Sports. The demonstrators, holding posters reading "The Volleyball Federation Is a Handful of Jerks," demanded the resignation of the Chairman of the Federation, Dancho Lazarov, and its entire leadership.

Martin Stoev, who was nominated as Stoychev's replacement, stated that he would invite star player Matey Kaziyski to join the team for the Olympics in London, despite Kaziyski's attacks on him.

Several days ago, Kaziyski declared that he would not play for Bulgaria if Lazarov does not resign.

On Thursday, the Federation announced that Martin Stoev will take over as the team's new coach. However, it later stated that no such decision has been made.

"Everyone can say what they wish, but there must be some limits. I want to remind that this same team did not make the Olympics and then I led them to being third in the world, in the World Cup, and fifth in the Olympics, so I have contributed with something too. If I am to become coach, I will forget my ego and invite Kaziyski," Stoev, quoted by the Trud (Labor) daily, says.

Bulgarian media now reports that the expectations are for his appointment will be officially announced on Monday.

The national team's former coach Radostin Stoychev resigned last Monday, as he had declared that he would not lead the team in the Olympic Games if Lazarov does not quit.

The popular and successful coach harshly criticized the Federation for its inefficient management, the scandals that have marred all championships, the inflated number of board members, and the existence of fictitious clubs.

On Friday, Sports Minister Svilen Neykov added to the mess by stating that Kaziyski may not boycott the upcoming Olympic tournament, also confirming that Martin Stoev is not to be appointed as coach.