What is Wrong with Bulgaria's Forest Act - Facts & Figures 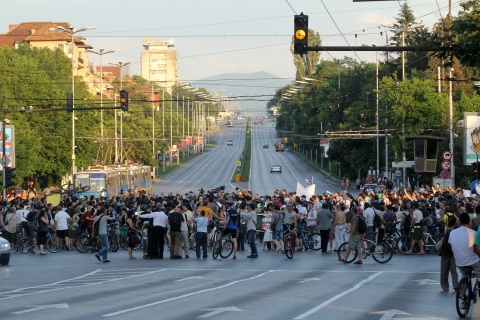 Some 2000 protestors rallied against the new law on Wednesday evening, blocking for more than an hour the traffic along the boulevard close to Eagles' bridge. Photo by BGNES

The recently adopted Forest Act amendments doom Bulgaria's forests and protected areas as they will lead to the plundering of the country's last significant natural resource, WWF has warned.

"The amendments of the Forest Act go against the public interest and contravene EU and Bulgarian legislation on competition as well as nature protection", said Konstantin Ivanov, Head of Communications at WWF Bulgaria.

"To put it simply, the amendments mean further deforestation and building up of forest and protected areas. They practically allow for the construction of ski runs and ski facilities without changing land use and for the acquisition of building rights on public land without tender and for an indefinite period."

Here is a list of disturbing facts about the amendments, as provided by WWF.

1. For the first time since Bulgaria gained its independence in 1878, the law would allow a third party to build in another party's property without the owner's consent and without adequate compensation.

2. For the first time since 1925 riparian forests will no longer be classified as forests and it will be lawful to cut them down without any control from the state.

4. For the first time since 1955 the law would permit the use of state forests timber twice over natural growth, which would reduce timber resources.

5. For the first time since 1991, when the current Bulgarian constitution was adopted, the government will allow for farmland to be used for purposes unrelated to farming, such as the construction of ski resorts and golf courses.

6. For the first time since 1991, the state is creating a sectoral aid scheme to aid the construction of ski resorts and golf courses, making them exempt from state taxes payable for change of land use.

7. For the first time since 1996, when the State Property Act came into force, building rights on public land will be given without tender by decision of the Minister of Agriculture.

8. For the first time since 1997 when restitution of forests started in Bulgaria, the state is allowing owners of private forests under 5 acres to cut them down without state control.

State forests and protected areas, the last significant public resource that has not yet passed into private hands in Bulgaria, occupy about 20% of the country's territory.