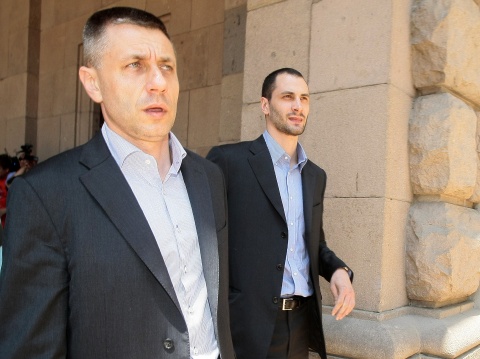 On Monday, Radostin Stoychev (L) and key player Matey Kaziyski (R) met with Bulgarian Prime Minister Boyko Borisov, who obviously failed to convince them to stay in the team. Photo by BGNES

"I am extremely disappointed by the federation and the people who take decisions in this federation. Personally I think these decisions hurt the interests of Bulgaria’s volleyball, they are driven by personal interests and goals that are incompatible with the national team," Kaziyski said at the press conference.

Stoychev and Kaziyski decided to resign in the wake of a bitter conflict with Bulgarian Volleyball Federation head, Dancho Lazarov.

The popular and very successful coach recently declared that he will not lead the team at the Olympic tournament if Lazarov does not resign. Talking to journalists on Monday he said he will stand by his promise as Lazarov refuses to resign despite the public pressure, the scandals and blunders he has made.

On Monday Stoychev harshly criticized the federation for its inefficient management, the scandals that have marred all championships, the inflated number of board members, the existence of fictitious clubs.

Bulgarian volleyball fans seem to be overwhelmingly opposing Lazarov, as numerous posters could be spotted during the team's latest games demanding his resignation.