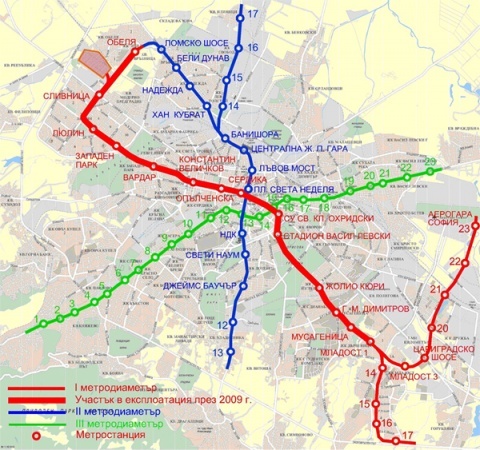 The second line of the Sofia Metro (in blue) is to be opened in 2012; it will be crossing the existing Line 1 at the Serdica metro station. File photo

One of the stations on the future second line of the Sofia Metro will be named "United Europe", according to a draft proposal of the municipal council in the Bulgarian capital.

Line 2 of the Sofia Metro is yet to be opened – most likely by September 2012; on Monday, the culture committee of the Sofia Municipality discussed a proposal to rename three of the future metro stations, thus changing their working names.

At present, only the first line of the Sofia Metro – from the Obelya and Lyulin to the Mladost quarter – is operational, and it is still being extended in the southeast to the Sofia International Airport and Business Park Sofia in the Mladost 4 quarter.

The second line of the Sofia Metro – from the Nadezhda quarter to the downtown and the Lozenets quarter – is to be inaugurated in 2012.

The next station, which was supposed to be called "St. Naum", is to be named after the "Earth and Man Museum" nearby. The St. Nedelya station, which will be located at the crossing with the first Sofia Metro line, will be renamed to Serdica; it will thus have the same name as the existing Serdica station on the first metro line.