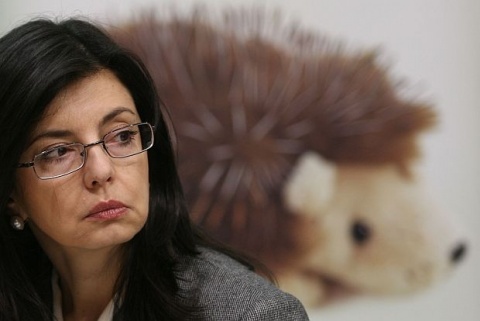 The initiative committee of 67 people signed a founding declaration at the Sofia Rainbow Plaza hotel, the place where her civic movement Bulgaria for Citizens was launched. The new party inherited the civic movement's name.

The committee includes some of the people who endorsed Kuneva in last year's presidential elections, as well as politicians who have decided to drop out of other right-wing projects.

"We are not afraid to stand up against political cartels and economic monopolies, against slander and lies, aggression and apathy. Five years after Bulgaria's EU accession, the country looks less and less European. It remains the poorest one in Europe, while unemployment, illiteracy and social exclusion are taking dangerous dimensions," part of the declaration reads.

In her address, the ex Commissioner thanked all for their support and declared her presidential bid "victorious," noting the movement already made a breakthrough in the political cartel in Bulgaria.

She criticized those currently holding the power of turning Bulgaria into a police State, of violating human rights, and invading business territories.

"We are in the situation of a Cold War. We should unite in the name of justice," said she.

She announced officially the transformation of her civic movement to a political party on Europe Day, May 9.

In March, Kuneva discontinued her membership in the liberal National Movement for Stability and Prosperity, NMSP, party.

Recent polls show that in addition to the ruling center-right Citizens for European Development of Bulgaria party, GERB, the left-wing Bulgarian Socialist Party, BSP, and the ethnic Turkish Movement for Rights and Freedoms, DPS, the formation of the former EU Commissioner is the only one with real chances to win parliamentary seats at the 2013 general elections.