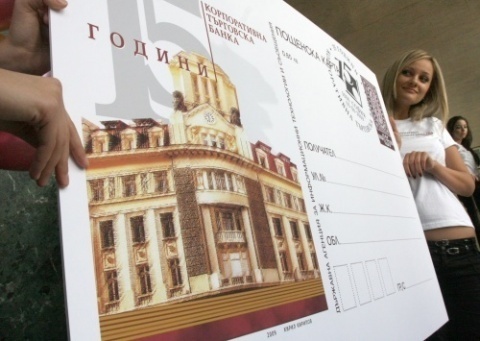 Bulgaria's Corporate Commercial Bank became known as the government's favorite bank in 2010 after data showed that it holds nearly half of the deposits by state-run companies. Photo by BGNES

The Union of Publishers in Bulgaria said it has lodged a complaint with the European Commission against Corporate Commercial Bank, widely known as the government's darling.

The complaint, lodged earlier this week, alleges liquidity support to Corporate Commercial Bank (CCB), which is believed to finance the media group of mogul Irena Krasteva.

According to the document deposits of state companies and ministries in the private CCB put the media group of mogul Irena Krasteva in a privileged position compared to other players on the market, distort it and breach EU competition law.

"The symbiosis between the money of state –owned companies, a private bank, a press group and a distribution network has nothing to do with the way Europe does business. Bulgarians already refuse to put up with the situation," Trud daily cited its publisher and chairman of the Union of Publishers in Bulgaria Lyubomir Pavlov.

The Commission shall as far as possible endeavor to adopt a decision within a period of 18 months from the opening of the formal investigation procedure. Should the EU executive decide that this is a case of unlawful state aid, the beneficiary should fully recover it.

In the middle of February, Trud daily published a letter by the European Commission, which obliges Bulgaria's government to reply to thirteen questions and provide information on the relationship history of Corporate Commercial Bank (CCB) with the state owned companies, which have deposited funds in CCB.

The letter has been sent by the European Commission Competition DG to the Permanent Representation of Bulgaria in the European Union on December 21, 2011.

The European Commission launched the investigation following an anonymous tip-off received in Brussels in the autumn of 2010, according to the report.

The letter makes it clear that the EU executive gathered information on the issue nearly a year.

Only six days after receiving the letter Deputy Finance Minister Vladislav Goranov forwarded it to the then Economy Minister Traicho Traikov, Transport Minister Ivailo Moskovski and Defense Minister Anyu Angelov. The three departments are owners of the largest enterprises, which still have not gone under the hammer.

The written statements by Bulgarian officials, as cited by Trud daily, show that the relationship of state-owned companies from the transport sector with the CCB began in the period 2003-2007, after which the contracts for deposit and current accounts have only been extended.

The officials however refuse to say whether there was a competition for the selection of the bank and what criteria were used, claiming the answer could destabilize the banking system.

Bulgaria's Corporate Commercial Bank holds nearly half of the money of strategic state-owned companies, it emerged in the middle of 2010 under pressure from the media.

The data was provided by Finance Minister Simeon Djankov at the request of the editors-in-chief of eleven of the biggest print media in Bulgaria, who approached the department, citing the law for access to information.

The data showed that nearly 65% of the monies of Bulgaria's top 18 state-run companies are managed by three banks, whose market share does not exceed 9% - Corporate Commercial Bank (48%), EIBank, where the prime minister's long-time live-in girlfriend Tsvetelina Borislavova held a 18% stake and the Central Cooperative Bank.

The top companies deposited in banks BGN 856 M by the end of the first quarter of the year 2010, BGN 408 M of the monies was deposited in CCB.

Acting on the suspicious revelations, Bulgaria's finance ministry issued new criteria for attracting deposits from strategic state-owned companies and promised to update the information regularly, but failed to do so.

According to high-ranking governmental officials, speaking on condition of anonymity to local media, there has been no significant change in the data about the banks which serve state-controlled enterprises in 2011 in comparison with 2010 and CCB continues to hold the biggest share of the money of strategic state-owned companies.

The Union of Publishers in Bulgaria, which lodged the complaint with the European Commission against Corporate Commercial Bank, is one of the two media associations in the Balkan country.

In the middle of February this year, several major Bulgarian newspaper and magazine publishers founded a new media association after the Union of Publishers in Bulgaria was ripped apart by conflicts.