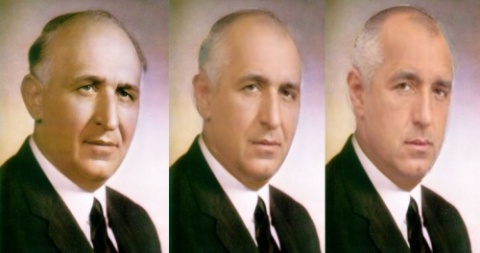 Along with journalists, Bulgarian bloggers too have pointed to an amazing resemblance between dictator Todor Zhivkov and current Prime Minister Boyko Borisov, presenting in a collage the latter as originating from the communist leader. File photo

Bulgarian journalists have alerted Brussels that media trends in the country are extremely alarming as lack of clarity over ownership and financing undermine the market.

They spoke on Wednesday at the open hearing in the European Parliament, organized by the Alliance for Liberal Democrats in Europe (ALDE) in a sign that European Commission and journalists would not give up on media freedom in Bulgaria.

"The hearing made it clear that the conditions for free media in Bulgaria have deteriorated. This is a trend, which may become irreversible if we don't take proper measures," commented Bulgaria's MEP Stanimir Ilchev, known also as the husband of a top TV journalist.

The Bulgarian journalists present at the hearing went a step further and drew parallels between communist dictator Todor Zhivkov and current Prime Minister Boyko Borisov, who has emerged as the darling of the media from the monopolist group of Irena Krasteva.

"The relationship between the media and the government, and particularly between the media and Prime Minister Boyko Borisov is nothing short of scandalous. It resembles only the times of communist dictator Todor Zhivkov," said Ivo Siromahov, a screenwriter at the popular talk show "Slavi's show".

He said the fact that the prosecutor's office did not initiate a probe following the scandalous revelations is a clear example of how stifled media freedom in Bulgaria is.

The tapes alleged that the government of PM Boyko Borisov is favoring certain companies and individuals with respect to investigations and appointments in the Customs Agency.

"In a normal country and normal media environment these scandalous revelations will lead to resignations and a detailed investigation. This was not the case in Bulgaria because the government puts pressure on the media – directly or indirectly," said Dachkov.