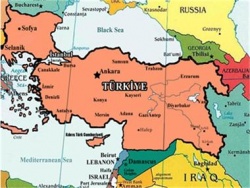 According to the Turkish newspaper "Milliyet," the map of Turkey, which lists parts of Bulgaria as Turkish lands, has been included in the national education program. Map by Trud

The Ministry of Education of Turkey and the Education Department of the city of Istanbul have issued an official apology for a map wrongly listing Bulgarian regions as Turkish territory.

The news was reported Thursday by the Bulgarian Trud (Labor) daily.

The content of the multimedia, part of Istanbul students' schoolbooks is wrong, the Turkish officials have said, offering apologies and stating they had no idea how this information ended up in education materials. State employees are quoted saying the former Head of the Istanbul Education Department is to be blamed in full for the blunder.

The news that in addition to Bulgaria, the materials claim entire Armenia, some regions of Iraq, the Greek parts of Cyprus, and some regions in Georgia as Turkish territory, made some headlines one day earlier.

According to the authors of the school text, Batumi is a historical Turkish town, now located in Georgia, the news agency "Kavkzakiy Uzel" reported, informing that the Foreign Affairs Ministry of Georgia is going to check the matter.

Turkish Deputy Prime Minister, Bulent Arinc (Arinch) has stated that it is "unacceptable to print such books," and has requested details on the case. Arinc, however, explained the map as being just an unintended mistake.