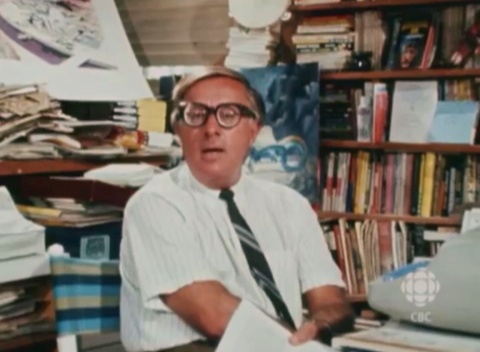 Bradbury, whose imagination gave birth to such classic books as "Fahrenheit 451," "The Martian Chronicles" and "Something Wicked This Way Comes," was one of the most celebrated among 20th century American writers of speculative fiction.

Bradbury was born in 1920 in Waukegan, Illinois, to Esther Moberg Bradbury, a Swedish immigrant and Leonard Spaulding Bradbury, a power and telephone lineman.

The Bradbury family lived in Tucson, Arizona in 1926–27 and 1932–33 as the father pursued employment, each time returning to Waukegan, but eventually settled in Los Angeles in 1934, when Ray was thirteen.

Bradbury graduated from Los Angeles High School, where he took poetry and short story writing courses that furthered his interest in writing, but he did not attend college.

"Libraries raised me. I don't believe in colleges and universities. I believe in libraries because most students don't have any money. When I graduated from high school, it was during the Depression and we had no money. I couldn't go to college, so I went to the library three days a week for 10 years," Bradbury commented on his education.

Many of his works have been adapted into television shows or films.