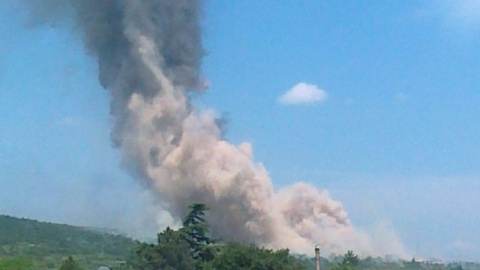 A series of blasts occurred Tuesday at a private-owned ammo site near the Petolachkata road junction close to the Bulgarian city of Sliven. Photo by BGNES

An employee of Bulgaria's Defense Ministry has been on an expensive and exotic vacation, paid for the Bereta Trading company, owner of Bulgaria's blasted ammunition depot.

On Tuesday, a series of blasts occurred at a private-owned ammo site near the Petolachkata road junction close to Sliven, injuring at least 9 people, two of them critically. Three of the ammunition depot's employees are still missing and now presumed dead.

The female employee worked as State expert at the "Logistics Contracts" department at the Ministry, the Bulgarian Capital daily reported Wednesday. She has been the lead expert in the public tender procedure awarding Bereta Trading the contract to dispose shells and had been assigned the task to control the follow-up activities of the company.

The employee has received a voucher for a trip to Bali in the amount of BGN nearly 7 000 while her husband has paid only BGN 1 250 for his vacation, according to the invoice from "Astral Holidays" travel agency.

The Defense Ministry has confirmed the information while Defense Minister, Anyu Angelov, told the same story to the Members of the Parliament Wednesday, during a hearing on the explosions.

Meanwhile, Filip Zlatanov, Chairman of the Commission for Preventing Conflict of Interests, announced in an interview for the Bulgarian National Radio, BNR, that indeed such conflict had been established for the said employee.

The Commission has been tipped and the violation had been easy to prove on the basis of a number of documents. The Conflict of Interest Watchdog then called the woman for a hearing, but its decision is currently being appealed with the Sofia Administrative Court.

Zlatanov explained that the State expert can be fired only after the Court upholds the Commission's decision, which could take 9 months to a year.

The Defense Minister also confirmed the conflict of interests' information and the decision of the Commission, saying the violation dated from 2009 and vowing the employee will be sanctioned accordingly.