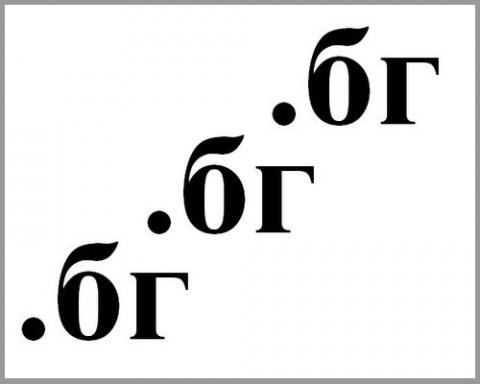 Bulgaria's proposal for a domain name in Cyrillic with a "бг" suffix was rejected because of similarity with Brazil's domain name "br". File photo

Bulgaria will receive soon the ".ею" Internet domain suffix as the European Union one ".eu" will be allowed to be written in Cyrillic.

The news was reported by the Bulgarian Transport and Communications Ministry, cited by Standard daily.

The country already underwent the major part of the procedures for approving the domain. The chances to get it are very feasible and much bigger than the initial request to use ".бг". It was snubbed on several occasions by the Internet Corporation for Assigned Names and Numbers (ICANN) because it resembles too much the Brazilian ".br". The unique letter "ю" offers a much better opportunity since there are no established similarities with any two-letter strings, according to the Ministry.

The approval means the country will soon be able to register and use internet domains on the European web written entirely in Bulgarian as a new step to preserve the Bulgarian language and the country's cultural identity.

The ".ею" was selected by Bulgarian internet users and received support from the Council of Standardization of Geographical Names, the Geodesy, Cartography and Cadastre Agency, and the Ministry of Regional Development and Public Works.

The Transport Ministry explains the delay with problems with the Greek string since the procedure for domains in both alphabets which are different than the Latin one is parallel, adding after the change in the rules for the procedure on December 15 2011, the obstacle no longer exists.

Other domains in Cyrillic that are currently used include the Russian "рф", the Serbian "срб" and the Kazakh "каз".

Bulgaria is one of the very first countries to declare its desire to register its own domain in Cyrillic.