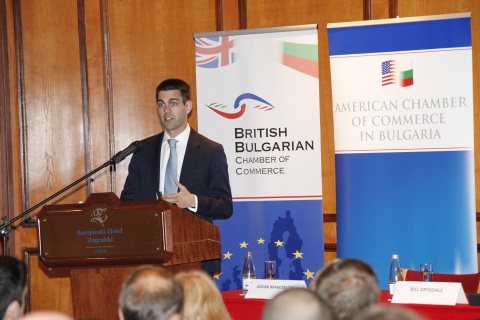 Aidan Manktelow of The Economist Intelligence Unit speaking at a business meeting with the BBCC and AmCham in Sofia, Tuesday, May 29, 2012. Photo by BBCC

Report of the British Bulgarian Chamber of Commerce on

of The Economist Intelligence Unit

120 Members and Friends of the BBCC and AmCham met on 29th May with Guest Speaker Aidan Manktelow of The Economist Intelligence Unit. Bill Drysdale, Chairman of the British Bulgarian Chamber, warmly welcomed participants at this first joint meeting with our colleagues from AmCham. The American Chamber has been generous in its support and encouragement since last year's re-launch of the BBCC, recognizing the importance of all business promotion agencies and chambers collaborating to bring trade and FDI to Bulgaria.

Irena Komitova, representive of The Economist in Bulgaria for the past 16 years, introduced Mr Manktelow, who holds a degree in International Relations, as a senior editor of the Magazine who has been at the heart of preparing reports on our region. He has special expertise in the Balkans, specializing in risk assessment with a focus on emerging markets. The big question today is: we know all the positives, but a range of negatives are stacked up against us – so how can business grow?

In setting the scene Aidan Manktelow reminded that we are in the fourth year since the financial crisis; recovering and powering ahead – but Bulgaria is bouncing along the bottom. There are domestic factors at work, and the country's competitiveness programme is faltering. The economic outlook is uncertain and the drivers for that will be addressed this evening. Despite some mitigating factors, the global economy has weakened again. In November-December it was in complete knockdown with many signs of failing.

Purchasing Manager's Indices tell an important story. The US economy is healthy. Fears that it might tip into recession are gone or quite weak. But the continuing oil crisis is starting to affect consumer demand. The Chinese economy is a bright spot. The big problem is the Euro zone, especially Spain and the renewed uncertainty over Greece. We should not forget that the Euro zone is the second largest economy in the world. The overall message is clear: global recovery continues, but is weak.

Greece looms large: Greek banks are in Bulgaria's top 10, which is a worry; Greece has been a significant contributor to FDI. Greek banks are reluctant to sell their Bulgarian subsidiaries: bank ownership changes could prompt financial turbulence. Elections in Greece have rightly been seen as a referendum. The big question: can Greece stay in the Euro zone? From the Greek side: the economic benefits from staying are predominant. Public opinion there: two-thirds favour the Euro zone. There are high risks attached to a Grexit. Is the Euro zone ready to cut Greece?

Against this uncertain background, Aidan Manktelow presented two fundamental scenarios which The Economist regards as the principal options:

1. A base-case where the crisis is contained and recovery continues. European Central Bank injections take place where needed. A new strategy is taking shape. Austerity measures are softened in favour of selective spending for growth. Some major departures from current policy can be expected. Germany is to allow salaries to rise. The path to a more balanced approach becomes evident. Recovery continues but oil prices go up. Bulgaria will be impacted through finance, trade and confidence.

2. Euro zone breakup, with downside risks predominating. The underlying problems of the periphery prevail. Triggered by Grexit, the likely outcomes prompt the breakup. Several countries default and exit the Euro zone. Massive financial disruption. Global recession and depression. Bulgaria is very exposed but less that in 2008-09.

Regionally, the best we can expect is a slow turnaround in South East Europe. Recovery has been lagging even in the low-cost transition economies in SEE. Romania and Bulgaria were still contracting in 2010. In 2011, the region saw positive growth. But countries failed to build competitiveness, with no export-driven recovery. Bulgaria and Romania were already overextended before the crisis, coinciding with the peak of global financial exuberance. Non-productive investments (in property) had a dominant influence. The labour market is still adjusting to weaker demand and high unemployment. Signs in 2011 were that things are going back on track, but 2012 has been disappointing. The Euro zone crisis has come at a bad time for Bulgaria.

Here at home The Economist's prognosis for Bulgaria is cautious but not wholly negative. Bulgaria is still seeking domestic growth: the economy is still rebalancing. Contraction in major European markets is not, as hoped, being balanced by more exports to Asia – whose economies are growing more slowly even if not contracting. Bulgaria continues to struggle: there is stabilization but not a rebound. Exports and industrial output have turned down again. GDP growth of just 0.8% is forecast for 2012. On the upside, several progressive countries are resuming FDI. Trends are more positive, though a return to pre-crisis levels cannot be expected. There is a reasonable prospect of Bulgaria getting back to USD 4 million a year, which is better than the pessimists expected.

• Return of investment from Asia because of high costs and efficiency issues there: time sensitive supply chain, low exposure to delays, can customise more leads etc by moving to SEE

• Investment by emerging markets multi-national corporations, looking to supply Europe and Turkey. Having Turkey on the doorstep is a massive advantage and something Bulgaria needs to capitalize on

Finally, competition for FDI will be tough: more progress on reforms is needed. Boosting R&D, innovation, the value chain. Making best use of the EU, especially the structural funds. Demographically, Bulgaria has limited supply of graduates. It is not moving as fast as other Balkan countries. Many actions and inspired leadership are needed to kick-start the delayed recovery. Euro zone problems have set back a return to serious growth. The Economist still expects the Euro zone crisis to be contained, but risks are high. Growth in Bulgaria will start to pick up from 2013. Thanking Aidan Manktelow for his inspiring though cautious presentation, Bill Drysdale highlighted the top rank audience of business people, economists, bankers, entrepreneurs and opinion leaders. A lot for everyone to think about – an objective external view that we can't dismiss lightly. However Mr Drysdale stressed that having worked here for 15 years, he is more optimistic: low wages, low tax, low state borrowing give Bulgaria a triple advantage to attract investment.

Some conspicuous multinationals are already invested here big time, they drive incoming exports from their several countries, and they are also Bulgaria's top exporters: a win, win, win situation! Should Greek banks have to divest, that too creates its own opportunities – perhaps for a British bank to come in. The reality is that Bulgaria is a better place than some analysts are prepared to admit!

A unique feature of the meeting, outperforming the average response to any speaker in the BBCC's experience to date, was the lively and well-balanced Q&A and Commentary session which followed. Highlights included:

- The problem of Eastern Europe? Until growth comes back, countries chase the growth at any price. Bulgaria is well placed to take advantage of that. High FDI has been achieved as a percentage of GDP. Reasonable optimism should prevail.

- Spain? The Spanish problem can be contained. Spanish banks are healthy. Only the regional banks are in difficulty.

- Assessment about Bulgaria being barely optimistic: Bulgaria's fundamentals are quite strong. As a market it has a lot of catch-up potential. Polish and Slovak markets are more mature - shifting the management to western European operations. Romania and Bulgaria are emerging markets. Companies expect good rates of growth. Bulgaria's has dynamic opportunities to supply Turkey. Several countries are working out their strategies for Turkey. Bulgaria must promote itself as a supplier. Turkey is a very prospective export market.

- Back last year, justifiable concerns over Turkey overheating? Dynamism + demographics. Turkey is one of the top ten markets for the next decade. Get there as quickly as possible!

- Exports: (a) Potential for growth based on domestic and neighbouring markets: Bulgaria to buy in to the EU Competitiveness programme. Expect internal growth, following the property fiasco. Growth to pick up in 2013. Domestic demand to grow. (b) If there is a Grexit: Greek banks collapsing, subsidiaries of Greek banks in Bulgaria exposed but containable: National Bank to react quickly. Instead of financial meltdown, pressure on Bulgarian subsidiaries to maintain capital adequacy.

- AmCham and its experience of organizing a business road show in the USA with 2 messages: Bulgaria as a very stable member in the EU; and Bulgaria as a crossroads and a gateway to the EU periphery. Mr Manktelow: Bulgaria has a particularly advantageous geographical location due to 2 factors: it is culturally linked with Russia and Turkey. If you take that, plus the infrastructure advantages to supply those markets, it does become a very attractive proposition.

- Feedback from clients: the present government is trying to impose restriction, restraints, growing monopolies. Mr Manktelow: despite that, the government will be re-elected next year as part of a coalition.

- Demographics: everything possible to be done to boost job creation. Countries like Bulgaria should become much more open to immigration. Immigration programmes now a strategic necessity.

- Expectations about the real estate market: the level of oversupply. Long period of flat prices ahead.

- The image of Bulgaria and erroneous assertion by the Government that 80% of a decision to invest is based on low taxes. Low taxes do help, but are only one of a number of factors. The government must listen more to businesses: striking Korean example given. Investors like to have a one-stop-shop for foreign companies. Not an easy thing to achieve, but doable and competing counties have succeeded with it.

- 4% GDP growth in Bulgaria does not create jobs. Do you see more positive scenarios? Progress on reforms has not been spectacular. A growth boost by the government needed. Banks being too cautious with their lending. Getting back to 6% GDP is desirable, but too much to expect.

- Your advice to SMEs in Bulgaria? Mr Drysdale: a lot of enterprising smaller businesses, a tremendous opportunity to get alongside those people. LinkedIn Bulgarian CEO Club a striking incubator in this regard.

Bringing the meeting to a close, Mr Peter Lithgow, Chairman of AmCham Bulgaria, thanked the Guest Speaker and the Audience, and concluded with some firm recommendations:

- How do we give advice to the government? AmCham and BBCC are bringing together the leaders of the business community. We would like to have a one-stop-shop and must present a strong and urgent case for it

- We have the leadership role. These are new channels that are emerging to talk to Government and be heard

- Branding Bulgaria: we have to showcase our story. We have our obligation as well to get out there and speak loudly

- Counter the negative stories with the positive ones. The reality is we do have the opportunity to engage.

- Today is visible proof that we can cooperate. For both Chambers it has been a great exercise working together. Having a united voice gives added leverage. 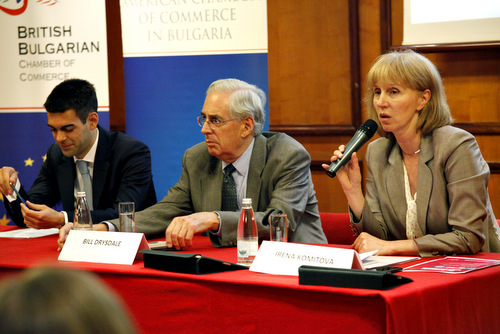