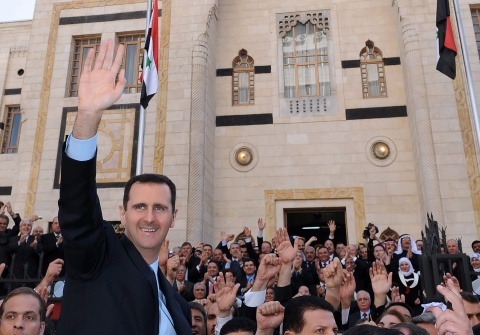 Syria's President Bashar Al-Assad spoke Sunday in front of the newly-elected Syrian Parliament, saying he will persist in crushing terrorists imperiling order in his country.

"The masks have fallen and the role of international forces in the conflict in Syria is obvious," argued Assad.

"Our country is facing a veritable war fueled from the outside," said the Syrian President.

He stated that the demands of militant opposition cannot be political, since they resort to brute force instead of dialogue.

Assad argued that the parliamentary elections he convened on May 7 were an adequate political answer to pro-democracy demands.

"What happened in Houla cannot be conceived to have been committed even by monsters," stated Assad, denouncing in abhorrence the massacre of 108 civilians, including many children.

While opposition forces allege that the atrocity has been committed by pro-government forces, the official state claims that it is the work of terrorist opposition units.

In his speech Sunday, Assad stressed that he will continue to oppose with brute force those who disturb peace in Syria, but remains open to peaceful dialogue on future reforms.