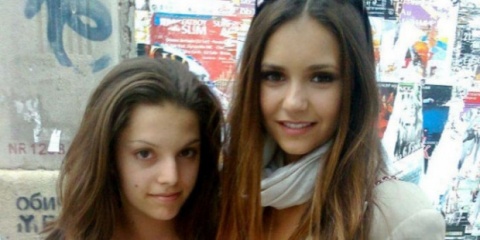 Some Bulgarian fans managed to have their picture taken with The Vampire Diaries star, Nina Dobrev, who is reportedly in the capital Sofia visiting her grandparents. Photo by Facebook

Bulgarian-born Hollywood actress and star of "The Vampire Diaries," Nina Dobrev, has been spotted in the capital Sofia.

Some of her fans have even managed to take a picture with her and to get autographs, according to Darik radio. The pictures have been published on Facebook, first on one of the several "Vampire Diaries" fan pages - All about VD.

It has been reported several times already that Dobrev is going to spend some time incognito in Sofia with her grandmother and grandfather, who live in the capital, and that she will pay a visit to the Bulgarian seaside. No further details of the travel plans, including exact dates, have been revealed.

The fact that Dobrev's boyfriend and Vampire Diaries co-star, Ian Somerhalder, is not accompanying her is a slight disappointment for Bulgarian female fans.

Born in Bulgaria, Nina Dobrev moved to Canada at the age of 2 and grew up in Toronto, Ontario. She began her career as a model. The actress had parts in movies such as The Roommate, Degrassi: The Next Generation, and Degrassi Goes Hollywood She currently lives in Los Angeles, California and in Atlanta, Georgia, where "The Vampire Diaries" is filmed.