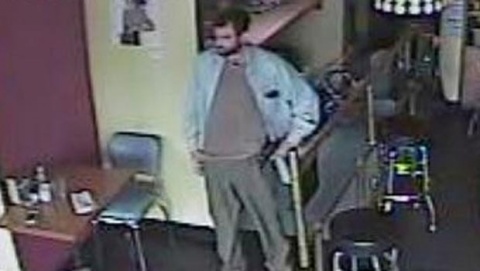 Seattle police released surveillance photos of a man suspected of killing three people and wounding 2 others at a North Seattle cafe. (KIRO/CBS News)

A gunman killed five people in Seattle on Wednesday - four at a cafe and another in a carjacking - before he shot himself as officers closed in following a citywide manhunt, authorities said.

Both the suspect and one of his victims died after the incident at a local hospital. One man wounded in cafe shooting remains in the hospital. He is in critical but stable condition following surgery earlier in the day, CBS News reported.

Police searching for the suspect in the first shooting near the University of Washington also had to respond to another fatal incident near the city's downtown. They say a man killed a woman in an apparent carjacking and fled in a black SUV. Authorities said late Wednesday they believe one man was responsible for both attacks.

"At this time, we feel pretty confident that we have the suspect," said Assistant Seattle Police Chief Nick Metz.

CBS points out that the latest spasm of deadly gun violence to hit the city worried Seattle's leaders and prompted police to consider increasing patrols in high-crime areas. The five deaths bring the number of homicides so far this year to 21, compared with 21 in all of last year.

Gunfire erupted late Wednesday morning at Cafe Racer, a restaurant and music venue north of the University of Washington. The gunman was described as a man in his 30s wearing dark clothes.

Police approach a house in the University district in Seattle close to where a gunman opened fire at a cafe Wednesday, May 30, 2012. They left shortly after. Two men died at the scene. A woman and a man from the cafe died at a hospital.

Assistant Police Chief Jim Pugel said late Wednesday afternoon that a plain-clothes detective spotted the cafe suspect in the southwestern part of the city and called for unformed officers and a SWAT team. As those officers arrived, the man put a gun to his head and pulled the trigger, Pugel said.

During the manhunt, Roosevelt High School, Eckstein Middle School and Greenlake Elementary were locked down, according to the school district.

In the second shooting, the SUV that the gunman fled in was later found, but the suspect remained at large, police said. In the last month, there have been two random killings in Seattle.

At a news conference, Seattle Mayor Mike McGinn said the spate of violence had "shaken" the city.