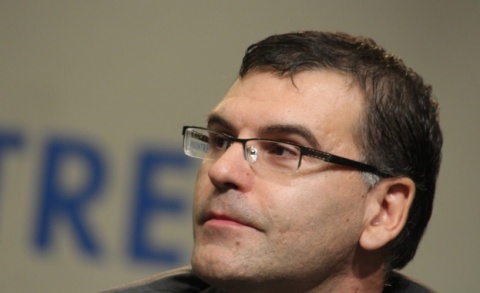 Bulgaria's Deputy Prime Minister and Finance Minister, Simeon Djankov, promised financial assistance for people whose homes have been damaged by the strong earthquake that hit western Bulgaria in the wee hours Tuesday.

Djankov says that State and municipal buildings will be repaired with government funds while other ways of financing will be sought for private homes, as was the case with the flooded village of Biser. After the appraisal and the assessment of the damage, there would be a charitable campaign for donations and partial State help for rebuilding private residencies.

He reminded that in the aftermath of the Biser tragedy, some of the procedures to grant money needed for repairs and for damage compensations for natural disasters have been alleviated, but stressed that the Value Added Tax, VAT, on donations sent as a cell phone text messages cannot be lifted. The Minister, however, explained that "there were talks in this direction," and voiced hope that eliminating VAT will be a fact in the near future.

Speaking in an interview for the largest, private TV channel bTV Wednesday morning, Djankov shared that he felt the quake very strongly and his entire family had been awaken by the tremor. He explained that because their home is located in the Sofia suburb of Boyana, which is very close to the epicenter, he heart a laud sound, similar to a thunder, or an approaching huge wave.

Djankov told the hosts that Prime Minister, Boyko Borisov, called him minutes after the first shock, alerting him to be prepared to act under emergency circumstances. Borisov also said that he felt like water was coming and this prompted an immediate inspection of all dams.

The epicenter of the strongest earthquake to hit Bulgaria in the last 100 years is located about 6 km from the western city of Pernik and is at a shallow depth, making the shocks felt even stronger. The first shock had a magnitude of 5.8 on the Richter scale and was registered at 2:58 am Tuesday morning.

Despite the strong tremors, there are no reported casualties, no serious injuries and no significant national infrastructure damage.

Schools are closed in the Pernik region Wednesday while the emergency situation is expected to be lifted at noon. Experts continue to assess the damage. The high school and middle school matriculation exams in the region have been postponed from Wednesday, May 23 to May 29.