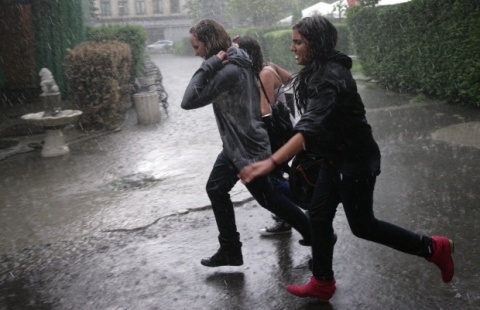 Younsters are running in order to find cover from the torrential rain in Sofia, May 22. Photo by BGNES

Parts of Bulgaria's capital Sofia have been flooded by torrential rains, just hours after the city and the rest of Western Bulgaria experienced their strongest earthquake in 154 years.

Strong gusts of wind, hail, and torrential rain were registered in the Bulgarian capital Tuesday afternoon, after amidst continuing aftershocks from the 2:58 am earthquake that hit Sofia and the city of Pernik with a magnitude of 5.8-5.9.

The torrential rains in Sofia brought the traffic to a halt in many parts of the city. The southern arc of the Sofia ring road has been flooded, the press center of Sofia Municipality announced Tuesday night.

The largest city road in Sofia, the Tsarigradsko Shose Blvd, has seen an horrific traffic jam as a result of the rain.

In addition to Sofia, several towns and cities in Western Bulgaria have suffered from the storm.

In the western city of Kyustendil, the storm knocked down 11 trees, the Kyustendil District Governor Vladislav Stoykov announced. Blagoevgrad, Sandanski, Petrich, and Kresna have also been affected.