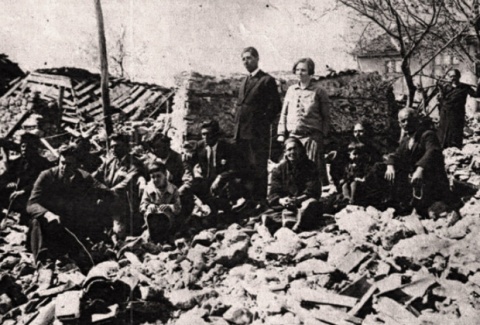 A file photo shows destruction from the 1928 earthquake in Chirpan; the small Bulgarian town was hit by another quake in 1942. Photo from Lost Bulgaria

The earthquake that the Bulgarian capital Sofia experienced at 3 am on Tuesday has been the strongest in its history since 1858, i.e. in 154 years, historical records indicate.

On Tuesday, Bulgaria's territory saw over 60 weak aftershocks after the 5.8-5.9-magnitude it experienced early Tuesday morning, according to the Geophysics Institute of the Bulgarian Academy of Sciences.

All of the 60 aftershocks had magnitudes of over 1 on the Richter scale, and their epicenters were around the western Bulgarian city of Pernik, where the initial earthquake hit at about 2:58 am on Tuesday. Some of the major aftershocks had a magnitude of 4.2-4.7, and were felt in Pernik and Sofia.

On September 30, 1858, when the future Bulgarian capital was still only a provincial town in the Ottoman Empire, it suffered an earthquake that had an estimated magnitude of 6.6-7.0 on the Richter Scale, damaging some 80% of its buildings.

As a result of the earthquake, 19 out of the 24 then mosques in Sofia saw their minarets collapse, while only two out of the seven churches remained operational. The 1858 earthquake claimed 4 lives in Sofia, and created huge cracks in the ground outside of the town.

Another strong earthquake in Bulgaria was the 1977 quake with its epicenter in Vrancea, Romania, which killed between 100 and 250 people in the Bulgarian Danube town of Svishtov, according to various estimates.

The latest earthquake in Sofia is comparable to the December 7, 1986 earthquake in Northeastern Bulgaria, which killed two people, and destroyed 150 buildings in the town of Strazhitsa.

After 2000, Bulgaria has seen a total of seven earthquakes with a magnitude beyond 4 on the Richter scale. The strongest one was in 2009 in the Black Sea near the town of Shabla, with a magnitude of 4.8.