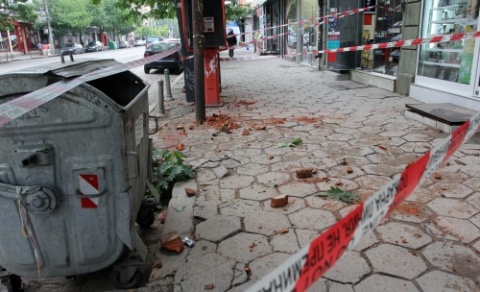 A 5.9-magnitude earthquake struck southwest of Bulgaria's capital Sofia shortly after 3:00 am on Tuesday. BGNES

Experts from Turkey's Istanbul-based Kandilli Observatory and Earthquake Research Institute have stated that the earthquake that shook Bulgaria early on Tuesday had a magnitude of 6.4 on the Richter scale.

The Romanian National Geophysics Institute believes the earthquake to have been with a magnitude of 6.1 on the Richter scale.

The seismic station at Greece's Aristotle University of Thessaloniki says the quake's magnitude was 6.2.

However, the Bulgarian Academy of Sciences has estimated a lower magnitude – 5.8 or 5.9.

The US Geological Survey maintains that the earthquake had a magnitude of 5.6.

The earthquake struck at 2:58 am Tuesday morning. Its epicenter was located about 6 km from the city of Pernik and some 26 km from Sofia. The quake struck at a depth of approximately 9.4 kilometers.