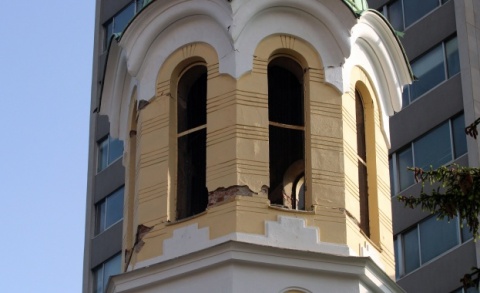 The "Saint Yoan Rilski" church in Bulgaria's western city of Pernik is one of the two more seriously damaged buildings from the strong overnight earthquake. Photo by CROSS

The "Saint Yoan Rilski" church and the "Marie Curie" high school in the city of Pernik have sustained the most serious damage from the strong earthquake that hit western Bulgaria overnight.

The cracks in their walls and the damage were inspected in person by Regional Development Minister, Lilyana Pavlova, who provided the above information.

Pavlova also inspected in person the nearby "Studena" dam, the theater in Pernik, other schools and churches, and the road infrastructure in the region.

No other serious damage has been established, including in the road infrastructure. The checks of tunnels and bridges, however, continue Tuesday afternoon.

Pavlova further informed that the wall of the "Studena" dam, which has been built to sustain an 8.0 point magnitude on the Richter scale shock, has no damage, the water level is even under the necessary one, and there will be no draining of dam, thus refuting earlier reports about the latter.

The theater building is also stable without any damage in the performance hall and with small cracks in the masonry of the administrative building.

Despite the strong shock, there are no other reported casualties, no serious injuries and no significant national infrastructure damage.