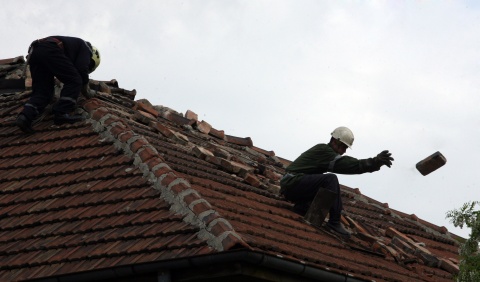 A 5.8-magnitude earthquake rattled Bulgaria’s capital and the southwestern town of Pernik in the small hours of Tuesday. Photo by BGNES

The 5.8-magnitude earthquake that struck Bulgaria's capital early on Tuesday will be dying down over a long period of time, probably two or three months, according to Irena Alexandrova, seismologist at the Bulgarian Academy of Sciences (BAS).

In an interview published by news portal dnevnik.bg the expert says that the jolt was very strong and that  the people living  in the southwestern town of Pernik and its surroundings will be experiencing light tremors measuring 2-2.5 on the Richter scale for quite some time.

She argues that it is a positive development because the major jolts measuring 3.5+ have become fewer and only the weaker tremors remain.

The seismologist notes that some 100 aftershocks have taken place, including microearthquakes, which are not detectable.

Alexandrova says that the jolts measuring 2.5+ on the Richter scale were over 30.

"Above the epicenter, the quake is felt to be vertical, while all of us in Sofia felt it to be horizontal," she explains.

The expert does not rule out a new jolt of a similar intensity but says that it is not very likely.

The BAS seismologist suggests that a scenario involving a larger number of weaker quakes is more likely and it is already happening.