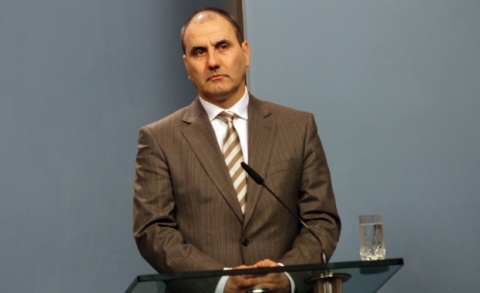 Bulgaria's Deputy Prime Minister, and Interior Minister, Tsvetan Tsvetanov, says the best news from the strong earthquake that hit the country overnight is the lack of casualties, serious injuries and material damage. Photo by BGNES

The crisis headquarters all over the country are on full alert in the aftermath of the strong earthquake that hit western Bulgaria overnight, according to Deputy Prime Minister, and Interior Minister, Tsvetan Tsvetanov.

Speaking for the Bulgarian National Television, BNT, Tsvetanov reported that police patrols have been dispatched on streets all over the country.

He confirmed that there are no casualties, no serious injuries and no significant national infrastructure damage, saying that this was the "best news" in the whole story.

"Everything is under control; there is no reason for alarm whatsoever. There are no cracked dam walls. There were power blackouts in the western town of Radomir, but the problem had been fixed," the Interior Minister explained.

Meanwhile, the Head Secretary of the Interior Ministry, Chief Commissar Kalin Georgiev, also declared the full readiness of all police to assist those in need.

Prime Minister, Boyko Borisov, vowed that all measures for protection of the population have been undertaken. He called an emergency meeting of the seismologists from the Geophysics Institute at the Bulgarian Academy of Sciences, BAS, to provide round-the-clock updates on the situation.