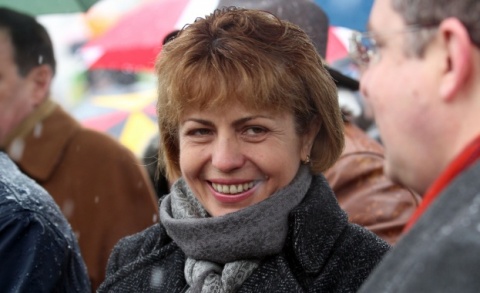 The Mayor of Sofia, Yordanka Fandakova, announced that there was no reason to declare an emergency situation in the capital after the strong overnight earthquake. Photo by BGNES

The Mayor of Bulgaria's capital Sofia, Yordanka Fandakova, announced Tuesday morning that there is no reason to declare an emergency situation in the aftermath of the strong earthquake that hit western Bulgaria overnight.

Fandakova, along with Prime Minister, Boyko Borisov, is currently at the Geophysics Institute at the Bulgarian Academy of Sciences, BAS, to receive round-the-clock updates on the situation.

She informed that there is no reason for alarm in the capital and people can gather at schools and subway stations in case of new aftershocks. There will be food and water supplies in these locations. The Civil Defense and the Interior Ministry are on high alert and fully prepared to help those in need.

The Mayor further explained that the city had not sustained any significant damage, except some fallen masonry and cracked walls, mainly in downtown Sofia where teams have been dispatched for assessment. There are no casualties.

The information was confirmed by Borisov. Speaking for the Bulgarian National Television, BNT, Tuesday morning he said that there are no human casualties and the damage is manageable. He thanked the seismologists from BAS for being on their posts and providing round-the-clock information and the emergency medical services for their adequate reaction.

The PM informed that nevertheless, schools and day care centers in Sofia will be closed Tuesday, mainly for parents' sake.

Meanwhile, the CROSS news agency cites their own source confirming that there is no damage on the wall of the "Iskar" dam near Sofia.