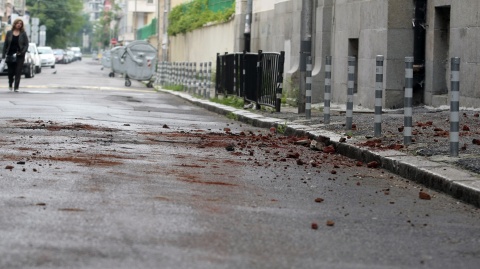 Bulgaria's capital and its surroundings were hit by a moderate earthquake early on Tuesday. Photo by BGNES

Government officials, fire safety experts and engineers are conducting inspections in southwestern Bulgaria for damages caused by the 5.8-magnitude earthquake that struck in the small hours of Tuesday.

Regional Development Minister Lilyana Pavlova and Lazar Lazarov, Chair of the Managing Board of the Road Infrastructure Agency (RIA), accompanied by a group of construction engineers and experts from the RIA laboratory, started Tuesday morning an inspection of the bridges at the Lyulin and Struma motorways and the entire road network in the region of Pernik, near the epicenter of the earthquake.

The situation in the Pernik region is going back to normal, according to reports of the press office of the Interior Ministry.

Teams of police officers and fire safety experts are assessing the damage caused by the jolt.

No damage has been detected to the walls of drinking water reservoirs and irrigation dams.

Experts from the Sofia Fire Department have checked all of the 48 tip-offs they received after the earthquake, helping elderly people and people with limited mobility.

Most of the tip-offs concerned demolished chimneys and cracked walls.

The jolt has not caused any deaths or injuries.

There have been no reports about damage to communal infrastructure.

An earthquake with a magnitude of 5.8 on the Richter scale shook Bulgaria's capital early on Tuesday.