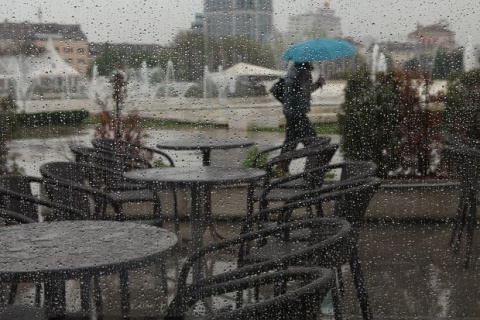 Rain will persist over the weekend for eastern Bulgaria. File photo by Sofia Photo Agency

Code yellow for potentially dangerous weather has been declared Saturday for 14 Bulgarian regions due to the forecast for torrential rains.

The warning has been released by the Institute for Meteorology and Hydrology at the Bulgarian Academy of Sciences, BAS. The alert is effective for the regions of Gabrovo, Veliko Tarnovo, Ruse, Razgrad, Silistra, Dobrich, Shumen, Varna, Burgas, Sliven, Yambol, Haskovo, Kardzhali, and Stara Zagora where the expected precipitations can reach 20 to 30 liters per square meter.

In western Bulgaria the cloud cover will dissipate and there will be more sun.

The mercury will begin to climb Saturday and will reach 27 degrees Celsius on Sunday. Rain will persist over the weekend for eastern Bulgaria. The warm weather will return Monday with summer-like temperatures – up to 31 degrees in central Bulgaria.

There will be more rain mid-week and the temperatures will go down to 22 degrees.

Rain is expected for most of June as well.

Meanwhile, the codes red and orange over upcoming floods in southern Bulgaria have been downgraded to orange and yellow respectively.