President of Bulgaria Visits Seattle with Focus on Economic Development 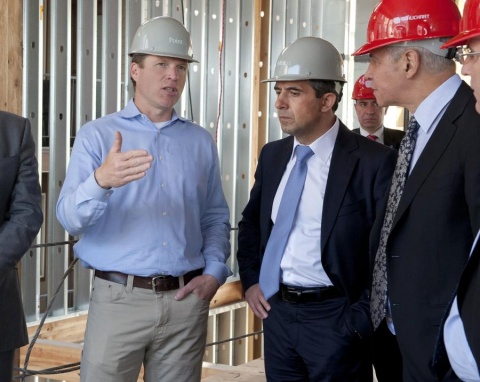 Bulgarian President Rosen Plevneliev was in Seattle this week on a special stop before a NATO Summit next week in Chicago.

"It's a wonderful city," Plevneliev said. "My first impression about the city isn't actually about the buildings and the beautiful sites, it's about people. There was so (how should I say) positive energy shown. I'm impressed."

Plevneliev met with the Bill & Melinda Gates Foundation and toured the currently under-construction Bullitt Center, The Bullitt Foundation project that is expected to be the "greenest building in the world" once it is complete.

The Bullitt Center's million headquarters is an ecological showcase rising atop Seattle's Capitol Hill. The building is part of the foundation's move toward urban ecology.

"If you look at the size of the building, nothing special," Plevneliev said. "But if you look at the revolutionary and pioneering approach at the Bullitt Center, it deserves for many presidents – not just for one – to come here. For me, as a guy who understands construction, who has been part of big investments in the construction industry in my previous work, I can just congratulate and can just say this is a visionary and a very important project."

The president, who was escorted by a heavy motorcade and the Secret Service, ran for office on a platform that included energy efficiency in buildings. Prior to his presidency, Plevneliev was an engineer who founded several construction companies and was the Minister of Regional Development and Public Works. He was elected president in October of 2011.

His visit to Seattle was focused on international trade and economic development, and he expressed great interest in the region's success as a technology hub because Bulgaria is in the process of building its own tech research park.