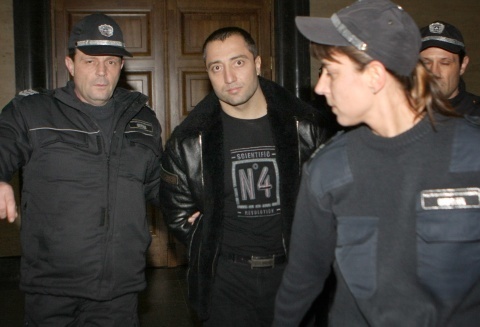 Drug boss Mityo Ochite (middle) is pictured being escorted to the courtroom. Photo by BGNES

Bulgarian drug boss Dimitar Zhelyazkov has found a safe refuge in Italy two months after he walked out of jail a free man, according to media reports.

Zhelyazkov, aka Mityo Ochite (i.e. the Eyes), known as the most powerful drug boss on Bulgaria's Black Sea, plans to move permanently abroad, together with his family, according to unconfirmed information.

He is believed to have settled in his new home in sunny Calabria, southern Italy.

Back then, Zhelyazkov's sentence was touted by the Three-Way Coalition government as a sign that it was cracking down on mafia bosses even though few, if any, such sentences of high-profile criminals have been seen since then.