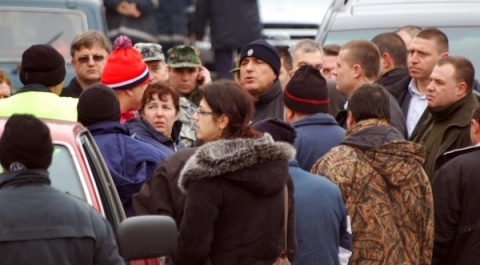 Bulgarian Prime Minister, Boyko Borisov, pictured here during his visit to the flooded areas on February 6, 2012. Photo by BGNES

The ruling, center-right Citizens for European Development of Bulgaria party, GERB, still has not transferred the one million levs that it promised to donate to a flood-buried village, a check has shown.

The funding was to be taken from the party's state subsidy and was destined to help the victims of the tragedy in the flooded southeastern village of Biser.

"This is our personal help to these people so that they can rebuild their homes. BGN 1 M for us as a party is a substantial amount. This will be in addition to the assistance from the European Commission, and money from the State budget," Prime Minister, Boyko Borisov, told Darik radio back in February.

The announcement of GERB donation sparked a heated controversy. The leader of the right-wing Democrats for Strong Bulgaria party, DSB, and former Prime Minister, Ivan Kostov, countered that the donation would infringe on the Political Parties Act and violates the law. The leader of the left-wing Bulgarian Socialist Party, BSP, and also a former PM, Sergey Stanishev, called it a PR action.

In response to the vehement criticism, the National Audit Office issued a special statement, according to which political parties in Bulgaria can legally make charitable donations from their state subsidy. The tragedy struck at the beginning of February after the waters of the Ivanovo dam bust its wall in the aftermath of heavy snow and flooded the nearby areas. The village of Biser was affected the worst.

The cabinet declared February 8 a national day of mourning for the victims.

By the end of April a total of BGN 900 180 has been donated to the account for the victims of the floods, which the Bulgarian Red Cross opened.