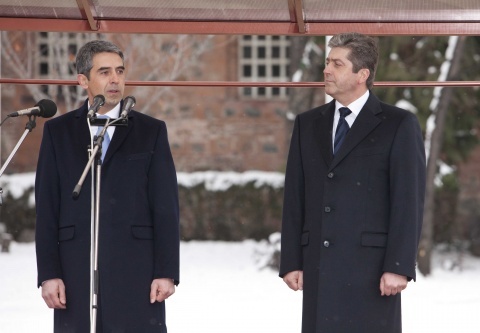 New Bulgarian President Rosen Plevneliev (L) and outgoing President Georgi Parvanov (R) at the handover ceremony in Sofia, January 22. Photo by the Office of the President

"My official state visits are west of Sofia. You can make this out. Others travelled in another direction," said Plevneliev during a meeting with the Bulgarian community in Seattle.

Since Tuesday, Plevneliev is on an extensive US visit, set to meet President Barack Obama, participate in the NATO summit in Chicago, and meet US companies and Bulgarians residing in America.

The rightist technocrat politician, who assumed office as Bulgaria's President in January, is said to be very pro-Western in his orientation, in contrast with predecessor, socialist Georgi Parvanov (2002-2012), who is said to have strong leanings towards Russia.

"I know the languages and I have things to say. To succeed, you need trust. But you have to build trust. I'm here to build trust with our strategic partner, the US," said the Bulgarian President, according to Focus Information Agency.

He expressed his firm belief that with stronger courage and self-esteem Bulgarians can achieve a lot for the development of their country.

Plevneliev also reiterated his commitment to creating a strategic vision for the long term development of Bulgaria to be implemented by rotating governments over the years.

Earlier Thursday, it was revealed that the Bulgarian President had invited key American IT companies to invest in a currently planned Sofia Tech Park.