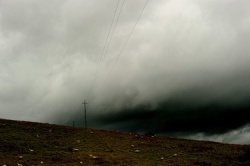 Code yellow for potentially dangerous weather has been declared Thursday in central northern and southern Bulgaria due to expected new heavy rains.

Under the influence of a Mediterranean cyclone passing over the Balkans, rains that started Monday will be renewed, and at some places will be significant Thursday.

Code yellow has been declared in 9 of Bulgaria's regions, where the precipitation is expected to be heaviest.

Highs Thursday will not go over 14-19 degrees Centigrade, said the National Institute of Meteorology and Hydrology, Bulgaria's national weather service.

Eastern Bulgaria will be affected by rains only later during the day, and to a smaller extent.

Weather in the mountains will be foggy, damn and cool, warn meteorologists.

Environment » Be a reporter: Write and send your article
Tags: rains, National Institute of Hydrology and Meteorology
Advertisement
Advertisement
Expats.bg All Are Welcome! Join Now!
Related Articles:
More from Environment