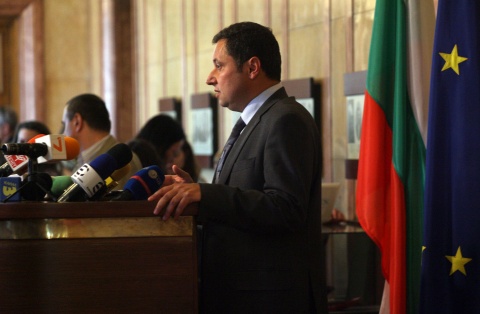 RZS leader Yane Yanev prepared the plan for the establishment of a second ad-hoc committee, photo by BGNES

A second ad-hoc committee tasked with probing the activities of the former Bulgarian President and Vice President, Parvanov and Marin, was set up Wednesday in Parliament.

The new entity is called "Ad-Hoc Committee to Examine Facts and Circumstances Related to the Actions and Initiatives of Government Officials in the Executive Branch and of Citizens in Relation to Presidential Decrees Granting Pardons, Cancelling Uncollectible Debts and Granting, Restoring and Withdrawing Bulgarian Citizenship in the period January 2002 – January 2012".

The new committee will be chaired by Yuliana Koleva, MP from center-right ruling party GERB.

The establishment of the new structure was backed by 92 MPs, with 23 votes against and 6 absiatinees.

The magistrates declared that the reasons for granting a pardon were determined by the President or Vice President and it was unacceptable to ask for the motives behind their decisions.

They argued that the promulgated presidential decrees granting a pardon were not subject to review by another state body.

The Constitutional Judges noted that the second term in office of Parvanov and Marin, who had been reelected, had started on the very same day the previous term in office expired, meaning that no second decree by Parvanov was necessary to authorize Marin for the activities he performed during the first five years.

The entity was chaired by Yane Yanev, leader of the marginal conservative Order, Law and Justice (RZS) party, who also tabled the proposal for the second committee.

The Bulgarian Socialist Party (BSP), the ethnic Turkish Movement for Rights and Freedoms (DPS) party and nationalist party Ataka refused to include their representatives into the first ad-hoc committee due to Yanev's leadership.

Yanev, however, vowed to plan a new ad-hoc committee that it is fully compatible with the decision of KS.

He said that the new unit would once again handle the decrees issued during the two terms in office of Parvanov and Marin but noted that the research could go back even further.

The RZS leader argued that the revised version of the ad-hoc committee would confirm the principle of parliamentary control over the executive.