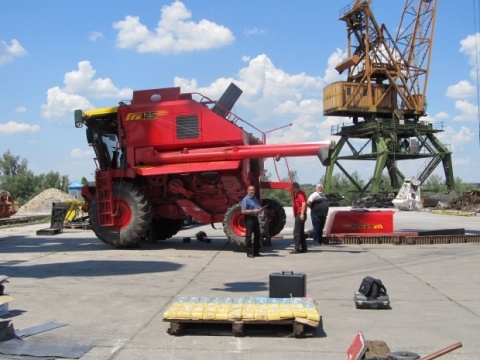 On May 5, Bulgarian customs officers have discovered a total of 67 kilograms of cocaine hidden in a combine harvester. Photo by BGNES

A Dutch Citizen, 54, and a resident of Bulgaria's second largest city of Plovdiv, 37, have been arrested in connection with the huge load of cocaine busted on May 5 in the Danube city of Ruse.

The special operation has been conducted by the Main Unit for Combatting Organized Crime, GDBOP.

Another man from Plovdiv, 31, is already behind bars.

67 kilograms of cocaine were found hidden in a combine harvester traveling from Argentina to the Netherlands. According to the Bulgarian authorities, the cocaine was worth around BGN 100 M (approximately EUR 50 M). The drug had been wrapped in aluminum foil. The combine harvester was found in a ship traveling from the Black Sea city of Varna to the "Iztok" (East) port of Ruse.

A Plovdiv "businessman," Nikolay Nikolov, 31, owner of 4 construction companies, was arrested 3 days later. On May 10, magistrates from the Ruse District Court, ruled to keep Nikolov behind bars on grounds of large-scale contraband and the possibility he could hide.

In addition, the investigation discovered in the village of Banya, near Plovdiv, a second combine harvester, also manufactured in Argentina, and from the same brand, leading to the latest arrests.

The Dutch is residing in Bulgaria permanently and lives in Plovdiv.