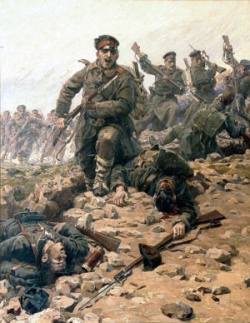 The bonuses that heads of political cabinets and other officials returned in the aftermath of a huge scandal are going to be used for Bulgaria's commemoration of the 100th anniversary of the Balkan Wars.

Up to BGN 600 000 from the returned bonuses account will be transferred to the budgets of the Council of Ministries and the Ministries of Defense and Foreign Affairs for the organization and execution of the tribute campaign.

The fund will be used for repairs and rebuilding of monuments of soldiers who have perished in the Wars, for displays, reinstatement of historical documents, and conferences among others.

The Defense Ministry will organize the creation of a commemorative badge "100 Years since the Balkan Wars," and will further use the money for official military honors ceremonies, the publishing of commemorative materials, an international conference, and the making of a list of Bulgarian servicemen, who have died in the battles.

The Foreign Affairs Ministry will publish a book, will prepare an exhibit about Macedonian soldiers, who in 1912 were part of the regular Bulgarian Army, and will organize the search for tombs of Bulgarian military men on the territory of Macedonia.

The information was reported by the government's press center.