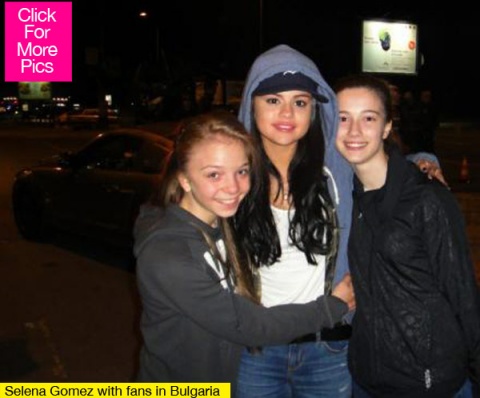 Selena Gomez with fans in Bulgaria. Photo by www.hollywoodlife.com

Bulgaria's teens have gone crazy with excitement over the stay of US starlet Selena Gomez, which unfortunately drove her crazy and unable to get any sleep at the no-longer secret hotel.

Even though the name of the hotel Selena was staying at has been kept secret, local Selenators quickly unraveled the mystery and lined up outside Grand Hotel Sofia hoping to just snatch a glimpse. The problem was that they were also shouting in ecstasy all day long.

Since Selena works on her latest movie "The Getaway" at night, she was very frustrated that she could not shut her eyes during the day and was forced to move to another location.

The name of her new accommodation remains undisclosed, for the time being.

The US teen pop star and actor is in Bulgaria to shoot "The Getaway", a remake of the classic 1972 flick of the same name, which starred Steve McQueenand Ali MacGraw.

Gomez will be starring in the new film project together with another popular Hollywood actor, Ethan Hawke.